I finished creating the 35 story boards and associated PDFs with linked material, a few days ago and it was quite a trek – despite having previously recorded what events, people and artefacts each book reminded me of. This was because I have a complete collection of indexed work documents and an extensive collection of indexed memorabilia, and each search of these archives brought to light additional material. For example, in searching for details of my visits to the Media Lab, I discovered not only a review of the Media Lab book which I had written for the Hicom Human Computer Interaction forum, but also my Hicom write up of the talk that Nicholas Negroponte, the head of the Media Lab, gave at Imperial College in 1989. Most people don’t have such extensive archives but, even so, I think they would probably still uncover additional forgotten material, if only in their minds, as they focused on the topic in hand.

For many of the books, I tried to find photos of the authors and of other people mentioned in the Story Boards, and, for the most part, this seemed fairly easy to do, though finding versions from the times they wrote their books, or from when I knew them, was a little more difficult; I didn’t really want to include photos of unrecognisable people who were 35 years older than I remembered them. In contrast, there was just no trace of some people, let alone a photo of them.

The other thing that was particularly striking as I waded through the books was the amount of information I came across that was new to me. Several of the authors had died – some at surprisingly young ages (for example, Michael Hammer, the co-author of Re-engineering the Corporation, had died in 2008 aged 60; and Susan Leigh Star, part of the Editorial Collective of the CSCW journal, died in 2010 aged 56); and others had made major job changes (for example, Lucy Suchman, author of Plans and Situated Actions, had moved from Xerox PARC in California to the UK’s Lancaster University). It was also a bit of a revelation to find out that my employer in the early 80s (the National Computing Centre in Manchester) had got into severe financial difficulties in 1996 and, after failing to take advantage of a number of rejuvenation and rescue attempts, was finally totally extinguished in 2017. Much of this additional information came from Wikipedia which often seemed to be the most immediately accessible and complete source of information.

The story boards I was creating are only single numbered pages which will be laminated and placed in a box on the physical Board. However, the PDF versions afford the ability to link an almost unlimited number of pages of additional information from the main Story Board page at the frornt of the file. I took full advantage of this facility and ended up with between 50 and 150 additional pages for each book. These will be fully accessible when I place the PDFs in the SideBooks app in my iPad. As I put these PDFs together, it wasn’t difficult to imagine all the documents in the collection being interlinked in a giant hypertext framework as envisaged by Jeff Conklin in the early 1980s, such that any of the material in the collection would be accessible via a number of jumps from any Story Board.

Having produced the 0.9 versions of the Story Boards, I turned my attention to creating the page of numbered spines which will act as the index for the physical story board. There wasn’t enough space to put full size spines on a single page, so I elected to have them one third of actual size. Achieving this reduction proved relatively easy by using the PowerPoint proportional formatting function whereby the arrow controlling vertical size is held down until its value is one third of its original value.The current version of this page is below. Its interesting to note that there’s space for additional items should the need arise. 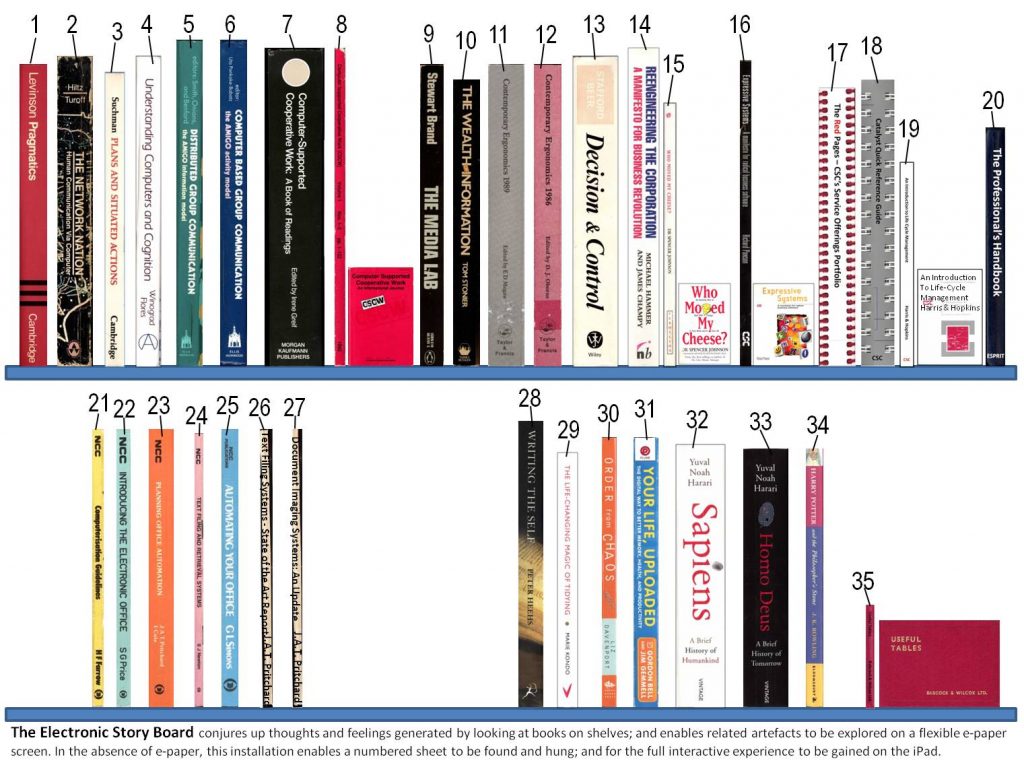 I’m now in the process of including the appropriate number on each Story Board and making final adjustments and corrections to each one; it won’t be long before the printed sheets can be laminated and the physical Story Board constructed.