Although my digitisation journeys continue to give me a great deal of satisfaction, I do look forward to the opportunities that arise to be a bit more artistic and creative. So, I’ve enjoyed the last three or four days spent trying to make something out of my doodle collection. The material seemed to fall into three categories – people (or maybe alien) figures, objects (such as trees, birds etc.), and patterns; and I decided that I would try to assemble the figures as though they were having a group photo taken surrounded by the objects, and that I would use the patterns as the frame for the display.

The material was all on rectangular notepad sheets so the first thing I did was to cut around the figure and object doodles and discard the blank paper. This exercise brought it home to me how many items there were and made me realise that I was going to need a big space to mount them on. After thinking about it for a while I decided to use the red brick back wall of the garage as my canvas. To stick the doodles to the wall, I used a roll of double sided selatape which I had acquired many years ago and which I’d been keeping for ‘when I might need it’ – it’s always satisfying to find a use for such things! I started off by assuming I would need a space of about 130 x 100cm  and ended up with a picture, including frame, of about 180 x 130cm. Within that space, I managed to include nearly all the figures and objects – but the frame only used up a proportion of the patterns.

As I stuck the doodles on the wall I came to realise that this wasn’t going to look very much like a group photo and more like just a collection of things in a frame – a rather less interesting prospect that I envisaged. Apart from anything else, it was impossible to have the face only doodles appear as if their bodies were obscured by the people in front of them. The picture ended up being just rows of cut out doodles, one row on top of another. I was aware that what I was doing would appear rather weird to an onlooker – weird doodles being stuck onto a garage wall. This combination of a falling away of a general design and vision, and the growing awareness of weirdness, spurred me on to complete the job. I finished sticking on the figures and objects, cut out the frame and stuck that on, and then started to take some photos. Unfortunately it was windy, and when I opened the garage door one of the doodle pages got blown off. I hastily shut the garage doors, took a few photos with the flash, and decided to wait for a less windy day with a bit of sun. Such are the considerations which make artistic work a little more interesting and challenging!  Luckily the following day (Sunday) was better and I managed to take some photos with the garage door open. Then it was a relatively quick job to remove the doodles and put them into the recycling ready for pickup on Monday morning.

This was not the most interesting or rewarding of artistic ventures – but I still enjoyed doing it; and I’ve been thinking that, perhaps, sometime in the future, I could capitalise on what I’ve achieved by using ArtRage to capture the outline of the photo and to colour in the doodles. However for now my doodle travels – and scribbling travels generally – have ended. The DD (Doodle Destination not Double Diamond) is shown below. 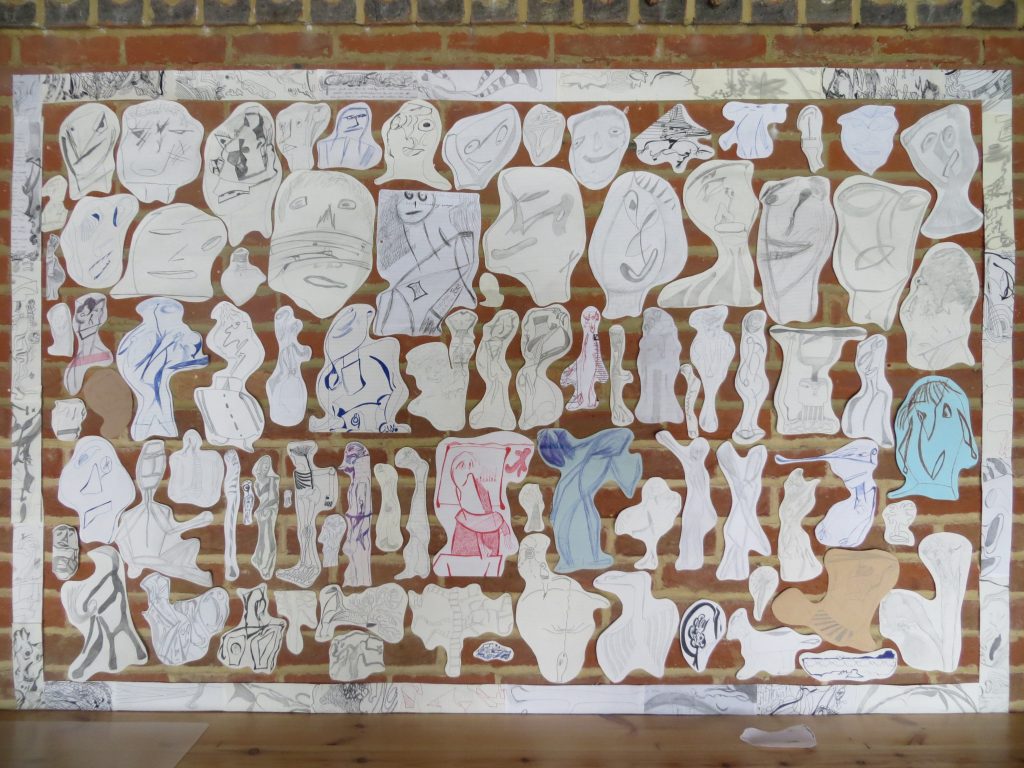