Digital objects are held in files which have names (file titles) and a variety of associated descriptive information (metadata). In the Windows operating system the metadata is referred to as a file’s ‘properties’; whereas for the Macintosh the metadata is obtained by selecting ‘Get Info’.  While the content of the metadata is not openly displayed and is largely controlled by the operating system, the content of the file title is very visible and almost entirely controlled by the user, and so provides a wonderful vehicle for including key descriptive information about the object(s) in question. Hence, it is recommended that meaningful file titles are created whenever possible so that the contents are comprehensible without relying on any kind of folder structure or associated index. Sometimes this can produce long file names, but the advantages to be gained in terms of clarity and communication usually far outweigh any disadvantages of having lengthy names up to the limit set by the operating system. However, one thing to look out for, under the Windows operating system at least, is that the permitted total file name length includes the length of the path name of the folders that the file lies within. This sometimes manifests itself by the system not allowing you to move a file to its final destination in a folder with a pathname longer than that of the folder in which the file was prepared. Hence, it’s generally a good idea to keep the names of upper level folders as short as possible to give you plenty of leeway with the length of the individual file titles.

A file title can be used to contain information that you might actually be looking for in the file itself. For example, if you digitise your annual car insurance policy papers, you could include the name of the insurer, the period covered and the amount you paid for the cover, in the file title. Taking this approach may actually mean that looking at the file title is sufficient and that you don’t have to open up the file itself. Another advantage is that, if you have several files dealing with the same sort of thing in the same folder, then a scan of the file titles actually tells you a history of what’s been going on. For example, if you digitise your health-related documents, then you can get a good idea of your history of illnesses and operations by just scanning the file titles. In summary, file titles can constitute a mini-database of easily viewable information; we should make use of this capability whenever possible.

The information in file titles is a sort of metadata – but rather limited in its quantity and type. In contrast, operating systems hold much more metadata about each file – and some of that metadata can be specified by the user. For example, for music files under the Windows operating system, the details tab of the file properties includes artist, album, title, genre, and date fields which can all be adjusted by the user. Similarly, the metadata contained in digital photo file properties is extensive. However, sometimes the metadata you want to hold will not be catered for by the operating system, and in these cases the answer is to establish your own index and to link the entry in the index with the digital object by using a unique reference number/code. The number/code will be allocated in the index first and then included in the file title – elements of a typical file title structure are shown below:

Then, any amount of additional metadata about each object can be held in the index. For example, in a memento index you can include some key words (facets), how you digitised each item, and where the physical items are stored.

Specialised databases can be used to create indexes; however, these are to be avoided where possible as they lock you into specific software suppliers and, inevitably, regular (expensive) upgrades. Usually, standard spreadsheet software such as Microsoft Excel will provide sufficient functionality for an OFC collection index.

When a unique identifier from an index is included in the file title of a digital object, the same unique identifier must also be attached to the associated physical object if it has been retained. For boxes, suitcases and similar containers, I use white strung tags which are cheaply available from stationery shops. For work-type documents, I used to write on the top right corner in blue felt tip pen. However, I decided that I wouldn’t want to permanently disfigure mementos in this way, so I have been using removable post-it note index tabs for these – though it is not a perfect solution because they do come off by mistake occasionally leaving an unidentified item. All these solutions are illustrated in the picture below. 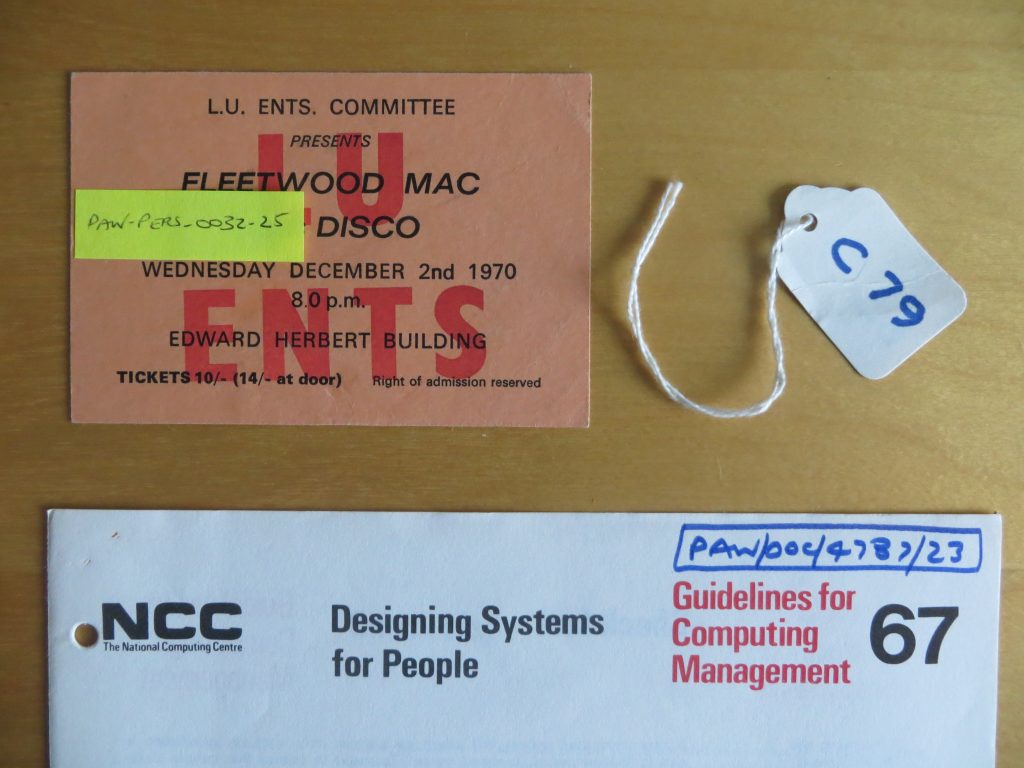