The PAWDOC collection was set up in 1981 to explore the application of office technology. In 2001 a paper was published in the Journal Behaviour & Information Technology called ’20 years in the life of a long term empirical personal electronic filing study’. This described PAWDOC and summarised findings about its use up to that point under the following 15 headings:

Two extra considerations are ‘Architecture‘ and ‘Requirements and Objectives‘. Now, a further 18 years on, the findings will be further reviewed in this and subsequent posts. The first of these follows below.

The precursor to PAWDOC was a conventional filing system in an upright cabinet using hanging folders and crystal tabs to store documents only (not journals, books etc.). The contents were specified in an index taxonomy with entries of the type, for example, 1.6.8 – Quarterly Progress Reports, which I was constantly adding to. Consequently much space was taken up in the cabinet by folders with crystal tabs housing only a few pages.  This changed after the PAWDOC system came into use: it needed far fewer hanging folders because each folder was filled to capacity with as many of the serially numbered documents that it could take.

The PAWDOC schema was explicitly defined to support the management of multiple sets of different material owned by multiple different owners. This capability was used to manage a variety of sets of my own material in addition to documents, for example, several different journals, 35mm slides (for making presentations), ring binders, and books; and, in the early years of the system, material owned by other people and organisations – though, as time went by, I made fewer and fewer such entries not least because of the uncertainty of being able to access such material.

The system soon became an integral part of my working life, and I used it just about every day. Several hundred new items were being added each year and this steady rate of acquisition soon ran up against the physical limits of the upright cabinet, so it became necessary to archive material in boxes and then to put some of the boxes in store. This went on until I started digitising newly acquired documents in 1996 and disposing of most originals. At this point, I also started to store born digital documents regardless of the applications they were created in.

In 2001 I started a new job in Bid Management which precluded personal storage of its associated highly confidential and fast moving documentation; so my useage of the PAWDOC system did reduce from then onwards. Nevertheless I continued to use it regularly on most days, and was still adding over 200 new items each year up to when I retired in 2012.

The 45 boxes of hardcopy that I had acquired eventually came out of store around 2001 and were stored in my garden shed. Their number was overwhelming and I began to doubt I would ever get them all digitised. However I stuck at the task, sometimes going at it solidly for several days at a time when my wife was away. By the time I retired in 2012 only 4 boxes remained and these had all been scanned by 2014: it was a great relief. The huge amount of physical space taken up by the collection had been reduced to just two archive boxes of significant hardcopy documents; and, after I had conducted a digital preservation exercise on the collection in 2018, the digital footprint of the collection amounted to some 115Gb. I have ended up with a fairly complete digitised archive of all the non-highly confidential materials that I had encountered throughout my working life, including substantial amounts of material from my earlier career from 1972 with Kodak and then CPC. Since retiring I’m continuing to add a few documents (around 40 up to 2019) in three categories: significant articles relating to the work I used to do; documents relating to the digital preservation of the PAWDOC collection; and material relating to work I am doing to investigate and document the findings from the PAWDOC collection’s 38 years of existence.

Specific questions relating to this aspect are answered below. Note that the status of each answer will fall into one of the following 5 categories: Not Started, Ideas Formed, Experience Gained, Partially Answered, Fully Answered.

Q1. What are the contents of the collection?

Q2. How much space does the collection take up?

2001 Answer: Fully answered: The paper takes up about 4.7 sq. metres of floor space and 1.7 metres of shelf space. The scanned images and electronic files take up 2.9 GB. The scanner, magneto-optical drive and CD Writer take up about 0.25 sq metres of desk space. The Filemaker Pro index is about 8.1 MB in size and the FISH data file is 11.2 MB. The Filemaker Pro, FISH, SQL Anywhere and Easy CD Creator software packages take up approximately 38 Mb.

2019 Answer: Fully answered: The two archive boxes stand one upon the other and take up 0.2 sq m of floor space. The laptop in which the electronic files reside takes up 0.08 sq m of desk space. The electronic files of the main collection take up 45.9 Gb storage space; and the backup files take up 66.6 Gb. The Filemaker Pro software used for the index takes up 336 Mb of file space.

Q3. What is the growth rate of the collection?

2019 Answer: Fully answered: The growth rate of the collection is shown in the chart below. 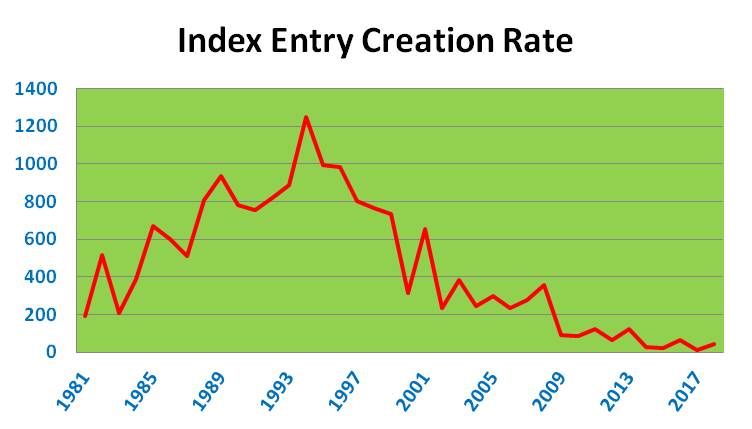 Q4. How often are the contents accessed?

NB. The various references in the texts above to Chan,1993 relate to the following reference at the end of the 2001 paper in Behaviour & Information Technology:

CHAN, S. C. 1993, Feasibility of Paperless Office, Submitted in partial fulfilment of the requirement for the degree of MSc in Information Systems and Technology in The Information Science Department at City University, London (Supervisor: Dr David Bawden) [PAW/DOC/4012/08].