I’ve now been through all 34 ESBs and made notes of between 30 and 300 words on my interaction with each one. This entry analyses those notes and derives some implications for the design of ESBs. The analysis assessed each part of the notes text and identified specific actions or observations as an itemised list. After completing this exercise for all 34 books, the itemised lists were inspected and generic statements derived for each item. For example, specific item d) for Book No 17 was ‘Read press release of merger’, and from this the generic statement ‘Prompted me to look at the related facts in the iPad version’ was derived. The generic statements were gradually standardised as the analysis proceeded and during a subsequent refinement process. The standardised generic statements were then grouped into two main sets (ESB Composition, and Reader Behaviour) and placed into one of seven categories – Layout, Content, Impact, Information access/search prompted, Facts discovered/re-discovered, Thoughts generated, and Reflections about the book. The generic statements, and the number of books for which a particular statement occurred, are shown in the following table. 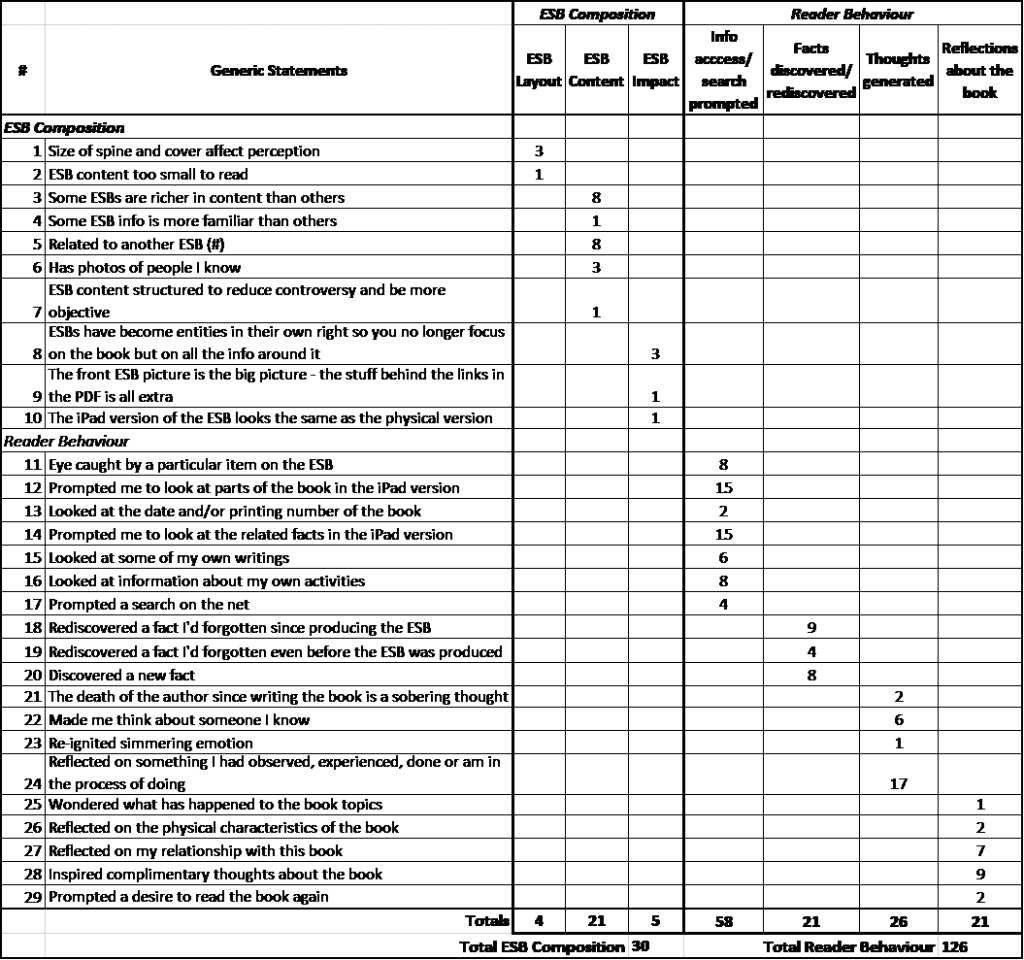 The observations relating to the design of the ESB fall into the following categories: Layout, Content, and Impact.

The observations relating to reader interaction behaviour with ESBs fall into following categories: Information access and search, Facts discovered/re-discovered, Thoughts generated, and Reflections about the book.

The amount of material to include on an ESB is totally dependent on the analysis of the owner’s thoughts about the book. Some books will stimulate the owner more than others. Consequently, some ESBs will inevitably contain more information than others, and be more interesting to the owner than others. However, the most significant finding from the observations about ESB composition is that the ESBs become entities in their own right, and that attention is drawn away from the books around which they are structured. Consequently, the fact that some of the book spines and covers were too small to recognise and read, becomes even more significant. No matter how much material is available to include on the ESB, the book spine and cover must be easily readable.

Two other points regarding ESB content emerged from this investigation: photos of people were highlighted a few times, so it seems worthwhile including such items where possible; and it was noted that some ESBs were related to each other. This latter point could be simply dealt with in the physical versions of the ESBs by adding a note such as ‘See also ESB #’. However, with a large electronic display it may be more useful to link directly to the related background information rather than to another main ESB – this aspect has yet to be explored.

Other than these two points, the general design of the ESB’s with the book spine and cover in the centre and other material around it, seems to work well. Of course, with a large electronic display, the constraints of an A4 page would not apply, but the principle of book in the centre with material around it would still apply. However, if the display first presented a bookshelf display of all the spines, from which a book was selected, the ESB would not need the spine and could just display the folded-out dust jacket or the front and back covers – this aspect too has yet to be explored.

Reader behaviour observations indicated that the links to extracts from the books and to related material, were well used and useful. The fact that net searches were made for additional information, and that new facts were identified in some cases, indicates that a facility to enable a reader to add additional material to a fully electronic ESB might be useful. Readers might also use such a facility to record some of the many thoughts which the observations in this investigation make clear are occurring throughout the interaction with a particular ESB.