The photos have all been done and the prints received back from the Snapfish service. They’ve come out well.  I’ve spent the last few weeks developing the overall design for the piece and think I’ve just about nailed it down – here’s my rough sketch of what I’m aiming for. 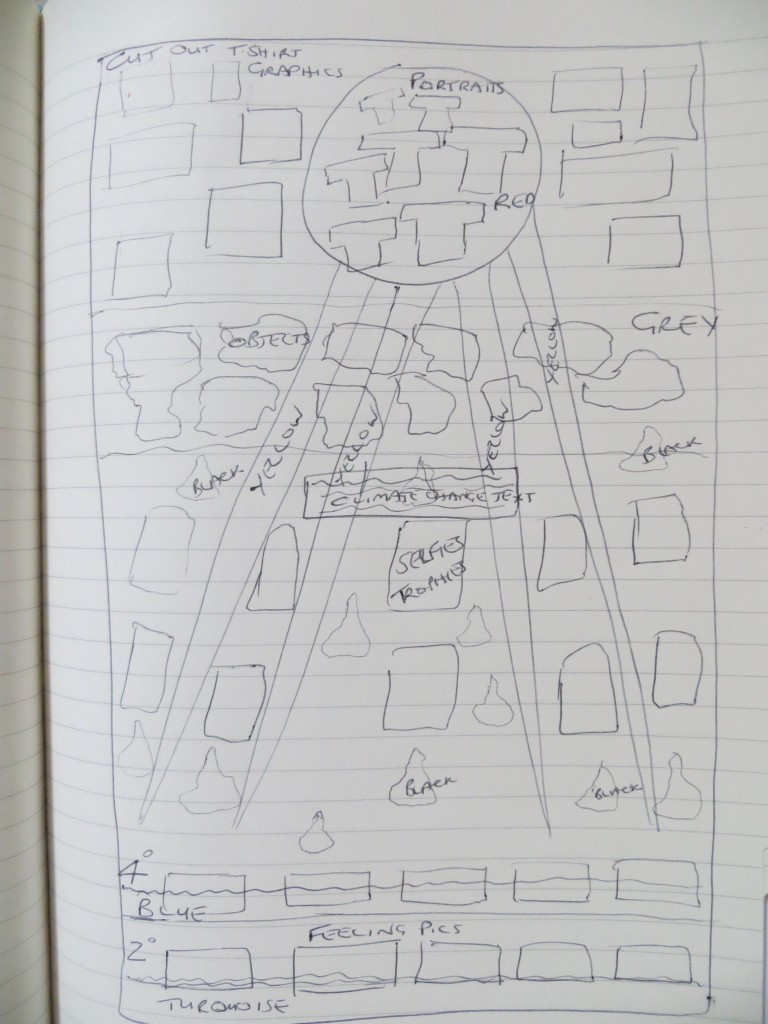 It’s going to go in a large IKEA frame measuring 98 x 68 cm. The collage will produced on a high quality white backing sheet of the same size made from the end-of-roll base paper used by Kodak to produce their print paper which was given to me several years ago.

The design starts at the top with a round sun made out of material from the red T-Shirt and on which the basic T-Shirt photos will be arranged. Emanating from this sun will be five rays of sunlight made from  the yellow T-Shirts. They will pass through the layer of Object photos (T-Shirts with objects associated with them layed on top) which will represent earth’s upper atmosphere. Below the upper atmosphere layer will be black bubbles made from the black T-Shirts and representing the increasing levels of CO2 we are emitting into the atmosphere. The trophy photos (selfies of me in the T-Shirts) will be placed around the CO2 bubbles. Also in this area, just under the prints representing the upper atmosphere will be some short text summarising the causes and impacts of climate change. At the bottom will be the Feeling photos (T-Shirts suspended on sticks and with a painted paper head cut-out on top) arranged in two layers – the bottom layer representing the lowest temperature increase we can hope for and the layer above it representing a worse temperature rise (the actual temperature rise numbers will be placed in large font to the left of each layer – probably 2 degrees and 4 degrees). The 2 degree layer will have a turquoise blue just lapping the bottom of the photos. The 4 degree layer will have dark blue overwhelming at least the bottom third of the photos.

I’ve decided to use the actual T-Shirt material for all the elements of the collage apart from the prints. I shall also cut out the logos from the T-Shirts and place them around the edges of the collage at the top. It will destroy the T-Shirts – but it will actually provide a real use for them which was my intention when I started this exercise – and, anyway, I’m not convinced I could have found a buyer for them on eBay.